This poster from St. Helena states “To be Sold & Let by Public Auction on Monday the 18th of May, 1829.” The poster names and briefly identifies both men and women. The image shown here is of a copy of a poster held by the Wilberforce House Museum, Hull England. However, this version has been cropped and lacks the coat of arms of the East India Company that appears on the original. An example of the uncropped poster is published in Robin Castell, St. Helena Proclamations, 1818-1943 (St. Helena, 2004). When reproduced in secondary works, the provenience of this poster is not given, or given as the West Indies or the U.S. South; the latter was the case in earlier versions of this website. However, research by Alexander Schulenburg, an historical anthropologist and specialist on St. Helena, demonstrates that the poster was printed on this tiny British colony in the South Atlantic, even though the island is not mentioned on the poster itself. Schulenburg’s reasoning for identifying the poster as St. Helena specifies that the reproduction shown here lacks the coat of arms that appears at the top of the original, and that this coat of arms is of the East India Company, identical to other St. Helena public notices from that period. Moreover, the “under the trees” specified on the poster refers to a well-known and identifiable spot on St. Helena where auctions and sales of all kinds were regularly held. Blucher, mentioned at the bottom of the poster, was a race horse on the island. The Addison Printer Government Office, at the very bottom, refers to John Addison, who was the colonial government printer. Finally, the poster features two common island surnames. See Schulenburg, “’For Sale Under the Trees-Slaves:’ Reclaiming an Icon of St. Helena’s Shameful Past,” Wirebird: The Journal of the Friends of St. Helena, no. 32 (2006) pp. 13-16). The enslavement of Africans and South Asians (e.g., Goans, Malaysians) had been established on St. Helena by the 1670s, if not earlier. In 1818, children born of slave women on or after Christmas day were nominally freed, and in 1831 or 1832, several years before general emancipation in the British empire, all 614 of the island’s slaves were emancipated. See E.L. Jackson, St. Helena: The Historic Island (New York, 1905), p. 68, 72, 260; Philip Gosse, St. Helena, 1502-1938 (London, 1938), p. 79, 191-92, 300. For a comprehensive account of St. Helena and its role in the trans-Atlantic slave trade, see Andrew Pearson, et al., Infernal Traffic: Excavation of a Liberated African Graveyard in Rupert's Valley, St. Helena (CBA Research Report 169, Council for British Archaeology (York, England), 2011.

A copy of a poster held by the Wilberforce House Museum in Hull, England. 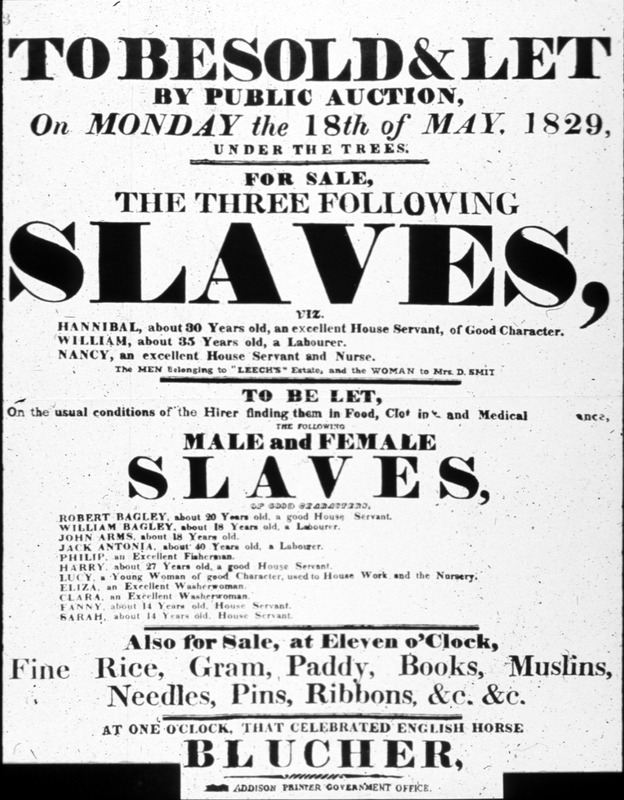